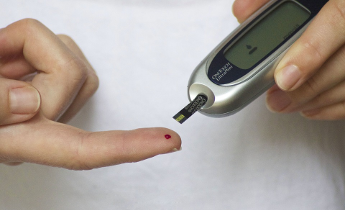 Research has linked the trace mineral chromium closely to the function of insulin. The European Food Safety Authority has concluded that chromium can balance blood sugar and that chromium yeast shows the best bioavailability compared to picolinate and chloride products.

In the late 1950s two researchers, Klaus Schwarz and Dr. Walter Mertz discovered that rats, which were fed exclusively with torula yeast, lost the ability to effectively remove the glucose content from the blood. This is the exact problem that people with diabetes face. The researchers found that when the rats received chromium from their diet or if they received a chromium supplement, their blood glucose regulating ability returned.

The two researchers developed the hypothesis that chromium was part of a complex consisting of chromium as the central part combined with three amino acids and a B vitamin. They named the substance glucose tolerance factor, abbreviated GTF.

The Co-acting Effect of Insulin and Chromium
The research has also been able to confirm that chromium is an active component closely linked to the hormone insulin. The collaborative mechanism between chromium and insulin happens when insulin molecules attach to receptors on the outer surface of the cells. Chromium-containing substances are attached to the same receptors, but on the inside of the cells. It signals the glucose channels of the cells to open so that glucose can enter the cell where it acts as a cellular nutrient.

Evidence showing that chromium plays the same role for blood sugar in humans as in rats came from a group of hospitalized patients on feeding tubes. These patients developed severe diabetic symptoms, including glucose intolerance, weight loss, reduced energy levels, and nerve and brain disorders despite the presence of insulin. Following the addition of chromium to the nutrient fluid, these symptoms ceased.

GTF and Chromodulin
In the 1980s, a group of Japanese researchers succeeded in isolating a chromium-containing substance consisting of amino acids with the same function as the hypothetical Glucose Tolerance Factor, whose exact composition had never been conclusively confirmed. The new substance was called Chromodulin. Chromodulin is the correct scientific identification, but GTF is still used albeit less and less.

Europe and The U.S. Disagrees on Chromium
The European Food Safety Organization (EFSA is the equivalent to the FDA) has concluded that chromium is nonetheless not essential. The EU argues that insulin seems be be able to work without chromium - therefore you can survive without chromium. In the U.S., however, the opinion is still that chromium is an essential substance. Regardless of the two opposing views insulin and chromium have a synergistic effect.

Potassium also Important
Without the mineral potassium we cannot deposit sugar into the muscles and liver for later use. Every sugar molecule we deposit requires a potassium molecule. If we get too little potassium from our diet, our sugar cravings are increased because the body's ability to deposit sugar is reduced and we form more body fat. In other words, we become overweight.

If we are lacking potassium, we risk sugar cravings just like lacking chromium. The daily amount of potassium required typically corresponds to the contents of seven vegetables. In the liver, the hormone IGF raises the blood sugar level when we do not get food by releasing stored sugar to the blood stream.

In healthy persons and in type 2 diabetics, the liver is actually more responsible for the body's blood glucose control via the hormone IGF than insulin from the pancreas is.

Magnesium
A scientific study from China has shown that by combining supplementation of chromium with magnesium, you achieve a more effective reduction in insulin resistance than if these two nutrients are taken separately.

Metformin
Interactions between chromium supplements and the medicine Metformin have not been studied. Metformin is given to people with type 2 diabetes when the elevated blood sugar levels cannot be controlled satisfactorily through diet, weight loss and exercise.

Theoretically, the two preparations can simultaneously enhance each other's effect. Therefore, it is advisable to monitor blood sugar levels if you take both preparations. Please note that there may also be a need to adjust the medication. Research has shown that chromium supplements are better tolerated than Metformin. It is noteworthy that Metformin, among other things, can lower the body's testosterone levels.

As we age, the body's chromium metabolism is reduced by 25-40%. For that reason, chromium yeast is particularly suited for elderly people because of its excellent bioavailability.

A minor study from 2013 of type 2 diabetes patients in insulin therapy has shown that supplements of 100 and 200 micrograms of chromium from chromium yeast, respectively, in a relatively short period of time were able to lower important factors such as fasting blood glucose and glycosylated hemoglobin, which are sugars binding to the hemoglobin of the red blood cells. It is therefore a good measure of the body's blood glucose control.

An Iranian meta-analysis of seven different scientific studies with chromium showed that supplementation with 250 micrograms or more for atleast three months for type 2 diabetics were able to lower their fasting blood sugar.

There are several other examples: A group of researchers reviewed a research database where they found 16 studies involving chromium supplementation for patients with type 2 diabetes. From these studies, 13 showed a significant improvement in the level of glucose, insulin and lipids.