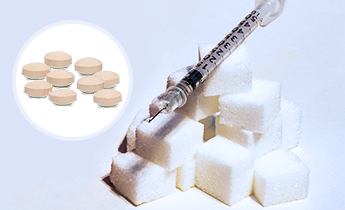 Research shows that chromium supports insulin's function. Chromium supplements may therefore benefit people with type 2 diabetes. Research also shows a superior effect of chromium yeast compared to other chromium sources. In Europe, ChromoPrecise is currently the only approved chromium yeast in the EU and the best scientifically documented product.

Sugar in the form of glucose is one of the body's three main sources of nutrition along with protein and fat. When you eat, carbohydrates from food degrade into sugars, which are then released into the bloodstream. This is the process that forms the socalled blood sugar. The hormone insulin is responsible for removing the sugar from the bloodstream and transporting it into the cells to be used to fuel cellular processes. Sugar combustion in the body's cells create the energy that is essential for, and fuel many bodily functions. Sugar is therefore very important for the body, though it is not necessary to eat pure sugar, as the body derives the necessary glucose from carbohydrates etc. from the food we eat.

The Scientific Misunderstanding of GTF
Chromodulin, or with an older term, GTF (glucose tolerance factor) is a molecule composed of 4 chromium ions and 4 amino acids (aspartate, cysteine, glutamate, and glycine). For years, it has been shown that the organically bound mineral chromium plays an important role in conjunction with insulin. But it is only within the last 10-15 years that one has found the more accurate connection. The essential interaction between chromium and the four amino acids is an important key to an effective dietary supplement that actually helps the body removing sugar from the blood stream and thereby balancing the blood sugar.

The Advantage of Yeast Chromium
For this reason organic chromium yeast is the most effective form of chromium supplements. Synthetic forms of chromium have a very low absorption rate, but it is possible to produce organic chromium by using yeast cells. This creates a chromium product, where the four amino acids are naturally present. Baking yeast and Brewers yeast are in themselves a base for these amino acids, which are naturally components of the yeast. Using yeast makes it possible to produce an organic and natural chromium supplement, that ensures that the body has the necessary amino acid building blocks to form the Chromodulin molecule, the basis for effective blood glucose control.

Important in Type 2 Diabetes
Chromium plays an important role in maintaining an appropriate blood sugar level in the body. However, when it comes to diabetes, the two types are vastly different; type 1 diabetics suffer from an autoimmune disease, which means that their immune system mistakenly attacks the body's insulin-producing cells or the insulin itself. Whereas type 2 diabetics have the problem that they are unable to utilize the insulin sufficiently and they may lack sufficient insulin production. It implies they are unable to bring the blood sugar level down. This is why type 1 diabetics need injections with insulin, whereas many type 2 diabetics today can manage their blood sugar by using dietary restrictions and medication.

A poor diet, insufficient exercise and being overweight play a major role in the development of type 2 diabetes, but researchers have also found another possible risk factor – chromium deficiency. In fact, diabetics excrete much chromium with the urine, although they are in dire need of the trace mineral. This easily leads to chromium deficiency, which in turn can make it even harder for the insulin to work.

Chromium's effect on the insulin function is the reason why it may have a positive effect on type 2 diabetes. Studies also indicate that people with type 2 diabetes more often have a lower level of chromium in the blood compared with people without diabetes due to the high excretion mentioned above.

Scientific Documentation
A study conducted by researchers from Charles University in the Czech Republic showed that people with type 2 diabetes, who received ChromoPrecise supplement actually achieved a significant decrease in their blood sugar levels. The study was performed with 36 people (9 men and 27 women) with type 2 diabetes. The participants were randomly divided into two teams, who received either 400 micrograms organic chromium (ChromoPrecise) or identical placebo tablets.
The study was published in the scientific journal Biological Trace Element Research.

ChromoPrecise is the EU's First Approved Chromium Yeast
EFSA, The European Food Safety Authority, has approved Pharma Nord's chromium yeast ingredient called ChromoPrecise, emphasizing that it is a safe product and that the absorption is up to 10 times higher than with inorganic chromium chloride. Part of the explanation is precisely the combination of amino acids and chromium, which, in the form of supplements, is only found in chromium yeast products.