CoQ10 and the trace mineral selenium are two essential substances for our health that complement each other in several ways. Each exerts important antioxidant functions in the body. CoQ10 as a fat soluble antioxidant, and selenium as a water-soluble one, however, there are also other reasons to combine those two substances in a dietary supplement. 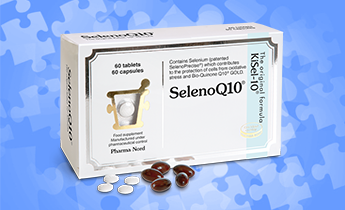 Selenium is an element and an important trace mineral in the human body. We need selenium in order to synthesize a number of selenoproteins required for the proper functioning of many bodily processes and functions. We also need selenium to make the antioxidant enzymes that protect the cells against harmful free radicals and are part of the mechanism that activates the antioxidant effect of CoQ10. Selenium is also necessary for the immune system, the thyroid function, for making normal sperm cells and for healthy hair and nails. Research increasingly documents the importance of selenium and how this trace mineral protects against the development of atherosclerosis and certain cancer forms.

We get selenium from food - how much we get from our diet depends on the selenium content in the agricultural soil. In the US, the Eastern coastal plain and the Pacific Northwest have selenium-poor soils. The Midwest has a high selenium content in the soil. Depending on the location in the US, selenium sourced from food can be sufficient, however, if it is insufficient, it will require trace amounts through supplementation.

Coenzyme Q10
CoQ10 is a vitamin-like substance, which is a prerequisite for the body to produce 95% of its total energy output. CoQ10 also has an important function as an antioxidant. The human body does produce some CoQ10, which is why it cannot be labeled a vitamin, and we also get a small amount from our diet in the amount of approximately 5 mg a day. However, after the age of 20 the body's production of CoQ10 begins to taper off. Therefore, people will feel the need to supplement as early as their 40s and at old age they will have only about half the amount of CoQ10 available compared to their youth without CoQ10 supplementation. Furthermore, statin therapy has been shown to inhibit the body’s production of CoQ10 because it blocks HMG-CoA Reductase enzyme – without which the body cannot product CoQ10.

One of the special interrelationships between selenium and CoQ10 in the body is, that people with inadequate intakes of selenium, are at risk of producing too little CoQ10 on their own. As a consequence, they will produce too little selenium containing antioxidant enzymes.

The KiSel-10 Study
KiSel-10 was a prospective randomized, double-blind, placebo-controlled clinical trial of supplementation of elderly Swedish citizens with a combination of selenium and CoQ10 for a 48-month period.

The researchers found that the effectiveness of the combined SelenoPrecise and Bio-Quinone Q10 treatment varied according to how severe the cardiac wall tension was. Long-term combined supplementation was most effective in helping those elderly study participants, who were in the early to middle stages of developing cardiac dysfunction. The researchers speculated that the major beneficial effect of the combined supplementation came from the antioxidant functions of the selenium containing enzymes and the CoQ10.

Pharma Nord's product, Bio-SelenoQ10®,  is the result of this groundbreaking KiSel-10 study.