Highlights from the 200 Years of Selenium Research Conference 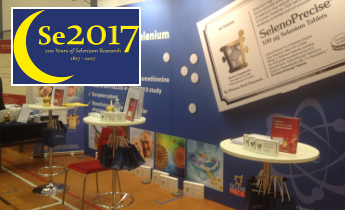 Selenium Scientists from all over the world were gathered in Stockholm from August 13th – 17th at the Se2017 Conference to celebrate that the Swedish scientist Jöns Jacob Berzelius discovered the mineral selenium 200 years ago. At the 5-day conference researchers presented the most recent scientific discoveries in regards to selenium’s role in human health.

Among the many presentations and sessions at the conference, Country Manager for Pharma Nord China, Dr. Xin Fu, hosted two poster sessions about mercury and selenium.
In the first session titled: “Selenium as a Mercury Antidote”, Dr Fu concluded, that increased intakes of selenium relative to mercury have at least three beneficial effects; binding bio-active mercury in an inert complex, increasing the protection from toxicity through selenoenzymes, and increasing the urinary excretion rate of mercury.

In her second session titled: “Organic Selenium Supplementation increases Mercury Excretion and decreases Oxidative Damage in long-term mercury-exposed Residents from Wanshan, China”, Dr Fu referred to 103 volunteers from the mercury contaminated Wanshan area, who were recruited for a study. 53 of these volunteers were supplemented with 100 μg of Pharma Nord's SelenoPrecise daily, while 50 of them were supplemented with non-selenium-enriched yeast for 3 months.
The effects of  a 90-days SelenoPrecise supplementation trial indicated that the selenium supplementation was able to increase mercury excretion and decrease urinary malondialdehyde (MDA) and 8-hydroxy-2-deoxyguanosine (8-OHdG) levels in the participants (lower oxidative stress and DNA-damage.)

US Study on Selenium and Mercury 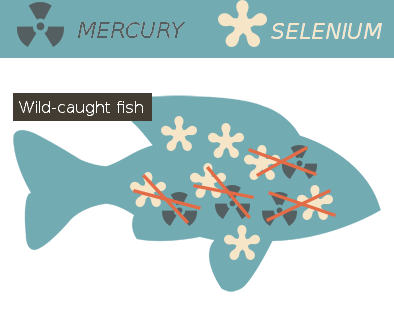 The message was that eating ocean fish protects against methyl mercury toxicity, because it improves selenium status while enhancing intakes of n-3 fatty acids and other nutrients.
Dr Ralston and his team have looked at >13,000 fish samples. Their conclusion is that almost all ocean fish have positive Health Benefit Value-Selenium (HBVSe). In other words, ocean fish contain more selenium than mercury and thus prevent rather than cause mercury toxicity.
However, both shark and pilot whale meat have negative HBVSe and are thus predicted to be harmful. HBVSe of freshwater fish is highly variable and will require careful studying.

Dr. Urban Alehagen of Sweden, known for the KiSel-10 study and all its derivative studies, presented a lecture titled: “Selenium, Coenzyme Q10 and Cardiovascular Health – Results from a 4-year-intervention in Elderly”. In the KiSel-10 study, 443 healthy elderly participants were randomized to receive supplementation with Selenium (SelenoPrecise) and Coenzyme Q10 (Bio-Quinone CoQ10 / Myoqinon) or placebo for 4 years.

Dr. Alehagen made a statement at the conference, which made quite an impact on the audience: “I do not recall hearing a single word about selenium, when I studied to become a doctor,” he openly admitted. Nonetheless, here he is, decades later, delivering groundbreaking proof that this essential micro-nutrient has a powerful role in the management of cardiovascular health.

Dr. Alehagen and his team of scientists have published no less than 12 studies using data from the blood samples from the original KiSel-10 study. What they have observed is that the combination of selenium and CoQ10 prevents an increase in several biomarkers, that normally go up in connection with heart disease. One of the things that they are now planning to look into, is whether selenium and CoQ10 in combination can counteract cardiac fibrosis, an abnormal thickening of the heart valves, that make it increasingly difficult for the heart muscle to contract.

Dr. Vladimirs Voicehovskis from Riga Stradins University in Latvia hosted a poster session titled: “Selenium Supplementation as a Defense Method against Post-traumatic Stress Disorder Development in Combats”.
In a study including 143 soldiers with an average age of 27 years in a Peace Support Mission (PSM) in Afghanistan, the participant group was divided into a treatment and a control group. Questionnaires were used for evaluation of post-traumatic stress disorder (PTSD).
Neuronal tissue specific OS indicator - Intensity of lipid peroxidation - Malondialdehyde (MDA) and Se in plasma (SeP) were determined. The patient group received 200 µg of SelenoPrecise per day during mission.
PTSD prevalence rate after Peace Support Mission was reduced by 46.03% in participants receiving selenium compared with the control group. Selenium supplementation seems to be an effective defense method against both oxidative stress and PTSD development.

Benefits of Combining CoQ10 and Selenium

One thing that research confirms is the theoretical benefit of taking selenium along with CoQ10.

On one hand we have Dr. Alehagen's research, which has shown a beneficial long-term effect of the combination of selenium and CoQ10 for healthy elderly people. For persons with PTSD we can look to Dr. Beatrice Golomb's research from 2014 of supplementing CoQ10 (Bio-Quinone CoQ10 / Myoqinon) to Gulf War veterans suffering from chronic Post Traumatic Stress Disorder, and now also Dr. Voicehovskis' more recent research, where SelenoPrecise effectively relieved acute PTSD.