It Starts with the Egg - No 1 Bestseller on Amazon 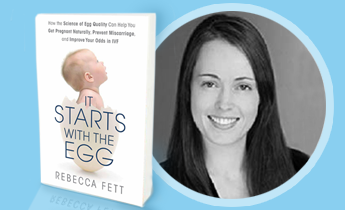 Rebecca Fett, molecular biologist and chemist, is the author of the #1 best selling fertility book on Amazon. She recently revised the book and published the second edition stock full of new research on fertility. More than 30,000 women have already benefited from Fett's research-based advice on turning around unexplained infertility, age-related infertility and recurrent miscarriage to successful pregnancy. Some of the major culprits causing these different kinds of infertility seem to be Coenzyme Q10 deficiency, exposure to toxins (through food, water and plastic storage sources) and autoimmunity.

Rebecca Fett's review of the relevant fertility research presents evidence that changes in a woman’s nutrition and lifestyle can improve her chances of pregnancy when coupled with powerful dietary supplements like CoQ10, that show an effect on fertility in many clinical trials.

How Can Coenzyme Q10 Help Women Conceive?
CoQ10 molecules are vitamin-like compounds that are essential cofactors in ATP production in the mitochondria in all cells in the body. In addition, CoQ10 is also a powerful antioxidant that neutralizes harmful free radicals from wrecking havoc inside the cells and potentially damaging DNA. The egg development cycle requires large amounts of energy and also has a large production of free radicals that can cause damage to the egg without sufficient antioxidants.

Fett explains that the egg cells have ten times the mitochondria concentrations of regular cells everywhere else in the body. Fett presents research that shows that poorly functioning mitochondria are associated with the following problems for women trying to become pregnant:

In other words, there is a link between the ATP energy levels in a woman’s eggs and the potential of her eggs to mature properly and become high-quality embryos. In egg development, meiosis requires more energy than is available when dealing with a CoQ10 deficiency. This can amount to chromosomal errors in the developing egg.

How Much Daily Coenzyme Q10 Will Benefit Egg Quality?

In the clinical trials summarized in the book, the typical daily dosage was 400 – 600 milligrams, starting one to three months before the IVF procedure. The one exception here was Pharma Nord's Bio-Quinone Active CoQ10 GOLD, which showed an effect with only 200mg/day in the Giannubilo study*.
The author discusses both ubiquinone and ubiquinol in the book. The most important thing to understand about CoQ10 is that the form is not important. CoQ10 molecules are redox molecules.  They convert back and forth in the cells according to need from an oxidized form (called ubiquinone) and a reduced/antioxidant form (called ubiquinol) – each form is each other's byproduct.
Thus, the most important thing to know is that the form of the CoQ10 does not matter - the crucial aspect is taking a high-quality CoQ10 product with a clinically proven effect.

When to Start and Stop Taking Coenzyme Q10 Supplements?

The author advises women to start as early as possible regardless of whether one is trying to conceive naturally or with the help of IVF procedures. Since the egg development cycle takes 3 months, one should ideally start at least three months in advance of an IVF cycle. Fertility doctors advise that women undergoing IVF should continue taking CoQ10 until they have a positive pregnancy test. Aspiring mothers trying to conceive naturally will also tend to stop supplementation at a positive pregnancy test. The discontinuation does not infer that there is evidence suggesting that CoQ10 will harm the mother or the fetus, rather it is simply due to a lack of large studies demonstrating that CoQ10 supplementation is safe during pregnancy.

Fett suggests that women who have had recurrent miscarriages may want to continue taking “a small amount of CoQ10 during early pregnancy”, because women with low CoQ10 levels are known to be more likely to miscarry.

Documented in more than 75 human scientific studies including the groundbreaking Q-Symbio and KiSel-10 studies, the original CoQ10 that started it all is now available in the US as a dietary supplement under the name Bio-Quinone Active CoQ10 GOLD.

Read more about the product here