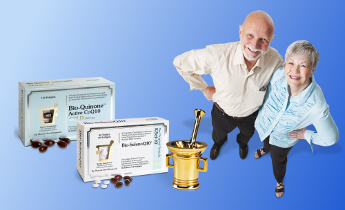 In the original Swedish placebo-controlled KiSel-10 study led by Associate Professor of Cardiology, Urban Alehagen, researchers gave selenium (SelenoPrecise) and CoQ10 (Bio-Quinone CoQ10) to healthy seniors of both genders for a four-year period.
The result showed that the group who received the active preparations had a reduced cardiovascular mortality by more than 50 per cent as compared to the placebo group.

The cardiology researchers have made several follow-up studies on the participants with data from the original study. The combination therapy of SelenoPrecise and Bio-Quinone CoQ10 keeps reinforcing the evidence of beneficial effects more than a decade after the clinical trial started. In the most recent of those follow-up studies, the researchers evaluated cardiovascular effects of the intervention twelve years after the introduction of the four-year supplementation period.

The follow up used the reliable Swedish national register of mortality that is based on death certificates and autopsy reports. As in the previous 10-year analysis, they found a lasting, significant protection in the participants who got SelenoPrecise and Bio-Quinone versus the placebo group, this time with a 40% reduced cardiovascular mortality after twelve years (p=0.001). They also found significantly lower cardiovascular mortality in those with ischemic heart disease, diabetes, hypertension and impaired functional capacity.

The theoretical mechanisms behind this lasting effect are believed to be various positive changes seen in oxidative stress, fibrosis and inflammation previously identified in the KiSel-10 clinical study's data.

A different clinical trial shows similar long-term effect from a SelenoPrecise containing anti-oxidant preparation
A combination of another SelenoPrecise containing product was used by Dr. Bonelli and a  team of researchers in Genoa, Italy. Dr. Bonelli et al. from the National Institute for Cancer Research in Genoa, Italy conducted in 1988  a 5-year randomized double-blind, placebo-controlled trial and showed a 50% reduction of polyps in the colon of the active treatment group receiving the preparation Bio-SelenoPrecise+Zinc. 13 years later, the reduction of polyps in the colon in the Selenium+Zinc group was almost unchanged at a 40% level.