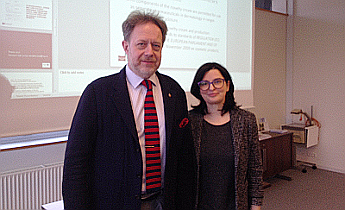 Pharma Nord's European Headquarters hosted a presentation on a Selenium study by two selenium researchers, Dr. Vladimirs Voicehovskis and Dr. Jūlija Voicehovska, who both are associate professors at the University of Riga Stradina University. The researches have done a study on Pharma Nord's selenium preparation SelenoPrecise and PTSD (Post-Traumatic Stress Disorder) in peace-keeping soldiers serving in Afghanistan. The results show that SelenoPrecise is capable of improving symptoms of Post-Traumatic Stress Disorder (PTSD).

A few years before this clinical study, Doctor Voicehovskis was behind a small placebo-controlled, randomized study on the effect of selenium on Post-Traumatic Stress Disorder in collaboration with the Latvian Military Medical Support Center. The study was originally part of Voicehovsky's Ph.D dissertation.
More precisely, the purpose of the study was to elucidate incidences and frequency of PTSD as well as to investigate the possible role of antioxidants in this disorder, in this case, specifically the effect of selenium.

Study Design
There were 143 soldiers in the study. All were Latvian men with an average age of 27 years who were to participate in a six-month peacekeeping mission in Afghanistan. The participants were examined using blood tests and questionnaires before and immediately after their departure. As a marker of the blood level of selenium, the amount of the selenoprotein glutathione peroxidase (Gpx) was measured and, in addition, a number of other markers for oxidative stress.
SelenoPrecise
The participants were randomized into a selenium and a placebo group. The selenium group received two 100 μg SelenoPrecise tablets at each day for the six-month duration. The placebo group received identical-looking tablets without selenium.

Conclusions
Finally, the severity of PTSD symptoms was reduced in the selenium group, whereas they had increased in the placebo group. The difference between the two groups was 20%. The study concludes that there is a reliable relationship between PTSD symptoms, their severity and oxidative stress. Supplements of selenium during a mission can reduce oxidative stress and minimize incidences of PTSD as well as its severity.

About PTSD
It is well-known that military activities, including international peacekeeping operations, can cause Post-Traumatic Stress Disorder. During World War I, the symptoms were known as shell shock. In the international classification of diseases, PTDS now appears in the main category: "Anxiety disorder, psychically conditioned somatic symptoms and stress disorders and adaptative reactions"

Symptoms of PTSD are seen as a delayed or prolonged reaction with reliving the trauma in the form of sudden feelings, thoughts and memories that are hard to control, recurrent relapse of the trauma in flashbacks, nightmares and other sleep disturbances, memory disturbances and difficulty concentrating, increased fatigue and irritability, anxiety, abusive behavior, pain, headache, lack of appetite and tightness.

Between 8 to 9 percent of the involved soldiers are affected by PTSD, twice as many women as men.

Effects of Stress
The extreme stress situations that soldiers - and others - may encounter, give among other things, rise to a high production of certain neurotransmitters such as glutamate and, as previously mentioned, MDA. Calcium penetrates into the cells, which all in all works in the same way as neurotoxins. Inflammatory substances are formed and oxidative stress is formed. Glia cells are also involved and the part of the brain called hippocampus shrinks.

Effect of Selenium
The brain consists of large amounts of fats and is therefore sensitive to large amounts of free radicals. Lipid peroxidation is a major cause of brain injury. Therefore, the proportion of selenium in the brain cells is higher than in other tissue types.

The selenoprotein glutathione peroxidase is used as a marker of the body's selenium status. Its main biological function is to protect the body from oxidative damage, which makes it quite effective without causing harmful by-products.

Sufficient selenium is essential for the optimal functioning of the selenoproteins in the body. In Latvia, like large parts of Europe, the agricultural soil is quite low in selenium contents, which makes selenium supplementation relevant.

An Anecdote
As there is no evidence of effective drug treatment of PTSD, this makes the favorable results from this selenium research even more interesting and relevant.

In this context, Doctor Voicehovskis recounted a time after the study when a military leader had heard of "these pills against PTSD". He asked if he could get some to give his soldiers, which he received, of course. Doctor Voicehovskis later met with some of these military people, who asked what these amazing pills contained?

- Selenium, he answered!
- Yes, yes, but what did they contain?
- Nothing but selenium!
- No, tell us now, what was the secret ingredient?
- There was none, just selenium!

It was not clear from the story if Doctor Voicehovskis succeeded in convincing these military people that selenium was the only active substance in the tablets.