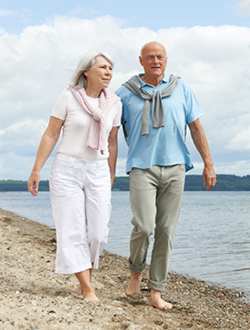 In Europe there has long been a great awareness of selenium's impact on health and longevity, as agricultural soil contains less and less selenium, which has also been the case in areas in the US. As a result, many elderly people lack selenium, an essential nutrient with a number of vital roles such as ensuring proper functioning of the immune system. Supplements may compensate for this deficiency.

On that basis, a team of Swedish researchers led by Dr Urban Alehagen from Linköping University decided to determine the selenium levels in an healthy elderly Swedish population and to analyze its impact on mortality.

The study of 668 elderly Swedish people revealed widespread lack of the essential trace mineral selenium. The researchers behind the study analyzed blood samples from all participants and found the same low selenium levels that were observed in the Finnish population back in the early 1980s. It was the alarmingly low selenium status in Finland's population at large that caused the Finnish health authorities to react by introducing mandatory selenium enrichment of all agricultural fertilizers in Finland.

Low Average Selenium Levels
The blood samples in the Swedish study showed an average selenium level in the elderly participants to be only 67.1 μg/l (micrograms per liter of blood), which - according to experts -  is far too low for all the body's selenium-dependent proteins to function optimally and may pose a health risk.

Based on this research the researchers point to the value of selenium supplementation in order to improve the health of the Swedish population.

The Body cannot Function without Selenium
It makes perfect sense to monitor selenium levels in both humans and animals. Selenium is an essential nutrient, which means that the body is unable to synthesize it. Instead, we must obtain selenium from food sources. If we fail to get enough selenium, it may have a negative effect on our numerous selenium-dependent body functions. These functions include the immune system, fertility, metabolism and the ability of cells to defend themselves against DNA damage.

Saturation of Selenoproteins
The body contains around 30 different proteins (selenoproteins) that cannot function without selenium. One of the most significant selenoproteins, selenoprotein P, requires a daily selenium intake of at least 100 micrograms, before it is fully saturated. Neither the selenium intake that led the Finnish government to introduce selenium-enriched fertilizers in 1985, nor the selenium levels that were observed in the recent Swedish study, are sufficient to achieve saturation.

The primary selenium sources are fish, shellfish and offal (heart, liver etc.). It may be particularly difficult for elderly people with limited food intake or vegetarians/vegans to get enough selenium from the diet.

More and more people use selenium supplements to ensure that they get enough of this important micronutrient. SelenoPrecise® is a unique organic selenium yeast with over 30 organic selenium species. With this preparation you get the variety of selenium species that is found in a balanced diet. SelenoPrecise® has a very high bio-availability and can document that nearly 90% of its selenium content gets absorbed in the body. More than 40 published studies are available, documenting the good effect of this selenium preparation. One of these studies, the KiSel-10 study (Alehagen U, et al. Int J Cardiol. 2013), demonstrated a good preventative effect and increased quality of life among those elderly people who used the product.
Share
tweet