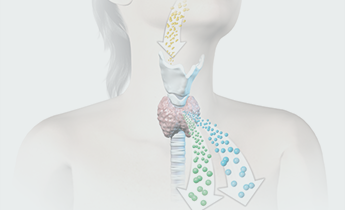 As we are not able to produce selenium in our bodies, we have to get this element from our food and from supplements. The selenium we absorb will then be incorporated into the amino acid selenocysteine.

This process generates a lot of free radicals in the form of hydrogen peroxide, which need to be neutralized in order not to damage the thyroid and its hormone production.

Selenium is also a part of antioxidant enzymes, which deactivate these free radicals.  Consequently, when we lack selenium, optimal amounts of selenium-containing antioxidant enzymes are not formed, thereby damaging the thyroid and reducing hormone production.

Are Recommended Selenium Allowances Sufficient?
The Recommended Dietary Allowances (RDA) for Selenium is only 55 µg in the US, but research suggests that in many cases there is a need for higher dosages to saturate the most critical selenoproteins and optimize the selenium-dependent functions in the body.

Selenium Deficiency
Maintaining an optimal concentration of selenium is a prerequisite to prevent thyroid disease and preserve overall health. For example, a selenium deficiency may negatively impact the thyroid function, which thereby markedly decreases the activity of thyroid related functions in the liver, kidneys and muscles and drop by maybe 50 percent in the thyroid gland and brain.

Organic Forms of Selenium are more Effective
For people with a selenium deficiency, supplementing with the organic form of selenium is more effective, because the body's ability to absorb the supplement is nearly identical with the absorption levels of selenium from food. People with autoimmune thyroid disease seem to benefit from selenium supplements in immunological mechanisms.