For many years, it was thought that chromium was a part of a substance called GTF (Glucose Tolerance Factor). The GTF compound was believed to consist of chromium, the B vitamin niacin and the amino acids glycine, cysteine and glutamic acid. But research data only partially supported the theory of GTF chromium, and the existence of a specific GTF molecule in the body has never been proven. More recent research has, however, revealed the existence of a unique chromium-binding molecule called chromodulin, which is slightly different from GTF, but which has the same characteristics. So when we talk about chromodulin instead of GTF, we are referring to the same benefits with respect to lessening insulin resistance. 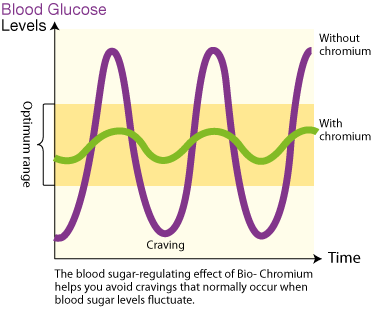 Scandinavian, British and American dietary analyses show that the average chromium intake is somewhere around 30-40 mcg daily. The EFSA (the European Food Safety Authority) recommends a daily chromium intake of 40 mcg while the WHO considers chromium to be safe with intakes up to 250 mcg.