Bio-SelenoQ10 is the combination of the original selenium tablets and CoQ10 softgels used in the groundbreaking KiSel-10 clinical study1 published in The International Journal of Cardiology. The study showed reduced mortality and heart health benefits. A more recent follow-up study showed strong anti-aging effects from the combined supplementation2. In both studies, scientists chose selenium and CoQ10 from Pharma Nord due to the well-documented absorption and pharmaceutical grade quality.

Storage:
Room temperature and out of direct sunlight. Keep out of reach of children. Use by date printed on base of the box

The tablets are round, white with a diameter of 0,37 inch, engraved with a mortar on each side. Each tablet contains 100 µg of selenium from the unique and patented* organic high-selenium yeast (SelenoPrecise®) – documented in over 40 published studies.

The softgels are dark brown oval soft gelatin capsules that are 0,6 inch long and 0,35 inch wide. Each softgel contains 100 mg of CoQ10 as ubiquinone (Bio-Quinone Acive CoQ10 Gold) in a special formula intended to provide the highest level of bio-availability.

The large Swedish clinical trial, named KiSel-10, showed how seniors can improve their quality of life and health through a four-year-long trial. The study results were published in 2013 in The International Journal of Cardiology1. 443 healthy seniors were divided into two groups. The experimental group was administered 2 x 100µg SelenoPrecise® and 2 x 100 mg of Pharma Nord's CoQ10, and the control group was administered matching placebos. After four years, the researchers were able to show a statistically significant difference between the two groups. The group that received the selenium/CoQ10 combo achieved a significant 54% reduction in the risk of dying from heart disease. Moreover, the data showed significantly lower levels of a known biomarker for heart disease, and the echocardiograms of the study participants receiving the active treatment showed significantly better heart function1.

In 2022, a follow-up study documented an anti-aging effect of this supplement2.

The substudy showed significantly less shortening of the telomeres and a reduced incidence of cardiovascular mortality in the participants who had received SelenoPrecise and CoQ10 compared to the group who had received inactive placebo supplements. The effect was seen in both men and women2.

The KiSel-10 researchers have conducted a number of scientific sub-studies using blood samples from the KiSel-10 Study to elucidate the biological mechanisms that explain the benefit of combined coenzyme Q10 and selenium supplementation for heart function and cardiovascular health. At headline level, these four biological mechanisms are especially noteworthy3:

It seems likely that it is the combination of the above effects that has resulted in the reduced cardiovascular mortality, improved heart function, and improved health-related quality of life observed in the KiSel-10 Study1,10.

The Selenium used in Bio-SelenoQ10

SelenoPrecise is a patented* selenium yeast containing selenomethionine and more than 30 different organic selenium species. It has been developed for the sake of emulating the diversity of selenium types found in a varied diet. For SelenoPrecise, we can document that 88.7% of the selenium content is absorbed in the body11. This widely used selenium yeast is highly reproducible and therefore ideal for scientific research due to the need for a reliable and homogenous outcome. SelenoPrecise is documented in over 40 scientific studies (published).

The CoQ10 used in Bio-SelenoQ10

Pharma Nord has spent more than 25 years developing and optimizing Coenzyme Q10 for the sole purpose of producing a CoQ10 preparation that scientifically can deliver documented superior bio-availability and quality. A wide range of clinical studies has demonstrated that the softgels from Pharma Nord in which the CoQ10 is dissolved in vegetable oils using a patented preheating technique and encapsulated in soft gelatin capsules away from light gives a higher bio-availability than other formulations12.

Softgels with a unique oil

Moreover, you cannot compare the soybean oils used in Pharma Nord’s CoQ10 with soybean oils used in cooking. The oil is control analyzed for the content of estrogen at an external laboratory and is completely free of estrogen and estrogen-like substances. The oil is only partially hydrogenated. A minor part of the oil has to be hydrogenated in order for the oil to reach a certain viscosity. Only then can we achieve the best absorption in the body of the CoQ10 content.

These targeted efforts are the reason why Pharma Nord's CoQ10 today is the most sold CoQ10-brand in Europe and is the CoQ10 preparation that is officially used in international CoQ10 research represented by the International Coenzyme Q10 Association (ICQA). 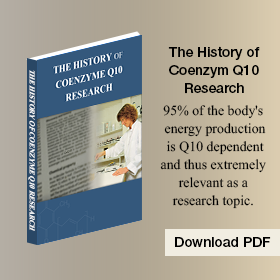