SelenoPrecise contains pharmaceutical-grade selenium in the form of a unique (patented) organic high-selenium yeast with a wide range of selenium species including Se-methylselenocysteine as found in natural garlic. The body's absorption of this specific selenium yeast (SelenoPrecise®) has been documented at 88.7% absorption in the body. SelenoPrecise's efficacy is documented in more than 40 published studies, including the groundbreaking KiSel-10 study1 that was published in The International Journal of Cardiology (2013).

Selenium is a vital trace element that helps maintain good cardiovascular health, a healthy immune system and good reproductive capability, just as it also protects cells against potentially harmful, tissue-scavenging molecules known as free radicals.* Some scientific evidence suggests that consumption of selenium may reduce the risk of certain forms of cancer. However, the FDA has determined that this evidence is limited and not conclusive.

SelenoPrecise is Pharma Nord’s potent and patented selenium yeast. It consists of small, round white tablets each containing 100 micrograms of selenium in the form of an organic source of highly absorbable selenomethionine and more than 20 other organically bound selenium compounds. The preparation is unique in the sense that it emulates the various selenium compounds, we get from selenium rich food and is able to document a very high level of bioavailability and a stable quality:

More than 40 scientific studies have been published dealing with product quality, the stable 81% I-selenomethionine content, the high level of bioavailability, and the safety of SelenoPrecise. This is what makes the preparation an extremely well-documented source of selenium. Moreover, it is the main reason why SelenoPrecise is used in scientific studies and research projects worldwide.

Why so many Selenium Species in SelenoPrecise?

SelenoPrecise is the Best Documented Selenium Preparation as a result of our commitment to internal documentation and our willingness to participate in clinical studies worldwide.

SelenoPrecise is substantiated with respect to scientific evidence of stability, safety and bioavailability.

SelenoPrecise is the only selenium tablet with a documented steady absorption rate of 88.7% for every batch. SelenoPrecise has a stable content of 67% organically bound selenium in the form of L-selenomethionine. Moreover, SelenoPrecise contains selenium-methyl-selenocysteine and more than 20 other organic selenium sources, each of which has a different function in the body.

Pharma Nord has a patent on the raw material used in SelenoPrecise. Because of its quality and documentation, SelenoPrecise is used in clinical trials and research. SelenoPrecise is the European reference product for selenium-enriched yeast.

Selenium is not Just Selenium

Selenium is a trace element and a mineral existing in the soil in varying amounts. In the US, much of the agricultural soil has a relatively high selenium content while it is relatively low in other countries, such as China and various European countries. Corn and other plants absorb selenium from the soil and pass organic selenium on to the animals and human beings that ingest the corn/plants. Human dietary selenium content therefore depends largely on the amounts of selenium supplied to the crops and vegetables by the soil.

Selenium is essential in a number of important hormonal and physiological functions in our body. Among other things, selenium is necessary for a normally functioning immune system, thyroid function, production of sperm cells, normal hair and nails, and selenium also protects the body's cells against oxidative stress.

Selenium-enriched yeast comes from yeast cells, which have been cultured in a selenium rich growth medium. This method of production gives a high content of naturally occurring organic L-selenomethionine. Selenium yeast also contains methylselenocysteine and a variety of other organic selenium compounds that emulate the natural selenium variation in our diet. Scientific studies show that it is important to have naturally occurring organic L-selenomethionine, methylselenocysteine, and other organic selenium compounds in a selenium supplement. The yeast is subsequently inactivated by heating processes, and, thereafter, the product becomes a selenium-rich carbohydrate.

Differences in the Quality of Selenium Yeasts

Many people take selenium supplements daily, but they are perhaps not aware of the large differences in quality and bioavailability in the different dietary supplements.
If you are not sure whether you are using the right product, you can try to test your current selenium tablet against SelenoPrecise - the best-documented selenium tablet.

Selenium is an essential trace element that supports an array of selenoproteins and selenium-dependent enzymes that are important for human health and well-being. One of these enzymes is glutathione peroxidase (Gsh-Px), which has several important antioxidant functions in the body. In addition, selenium supports a normal thyroid function. The thyroid function helps maintain a balanced metabolism. Furthermore, selenium supports biological processes such as:

Most of the Selenium in the Body is found in Two Forms:

Selenomethionine (that is embedded in different proteins rather than in methionine) and selenocysteine.

When our diet provides us too little selenium, our body is able to use selenium that is stored in the body, simply by converting selenomethionine that is bound to different proteins.

SelenoPrecise contains both of these main selenium sources (selenomethionine and selenocysteine) plus several other selenium compounds.

The Ability of Selenium to Bind to Heavy Metals

In the body, selenium binds to different heavy metals such as mercury and cadmium and forms insoluble compounds that are eventually discharged from the body. This process consumes some of the available selenium, leaving less for other important selenium-dependent processes2 Studies show that selenium binds to mercury in a 1:1 ratio.

Where is Selenium Found?

You can obtain selenium from fish, nuts and whole-grains. People who do not consume these food items regularly may benefit from taking selenium as a dietary supplement to ensure that the body has sufficient amounts available for its physiological processes. The Recommended Daily Value (DV) for selenium is around 70 mcg for adults.

Selenium in the soil is inorganic. Once plants absorb it, selenium gets converted into organic selenium. The selenium we obtain from our diet can be bound to amino acids such as methionine and cysteine. Selenium supplements can either be organic or inorganic. It is known that organic selenium compounds have an easier time getting absorbed in the body and incorporated into the different selenium-dependent enzymes and selenoproteins.

Directions:
Take one (1) tablet 1 to 2 times daily or as directed by your qualified healthcare professional. To be taken with a meal.
Do not exceed recommended amount.

Suitable for vegans and vegetarians.

After 4 years' supplementation, the results showed a significant effect, in addition to a general improvement in the quality of life in the experiment group taking SelenoPrecise® and Bio-Quinone Active CoQ10.*

The results were published in The International Journal of Cardiology, 167 (5), 2013.

The history of Selenium Research 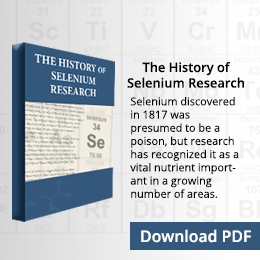